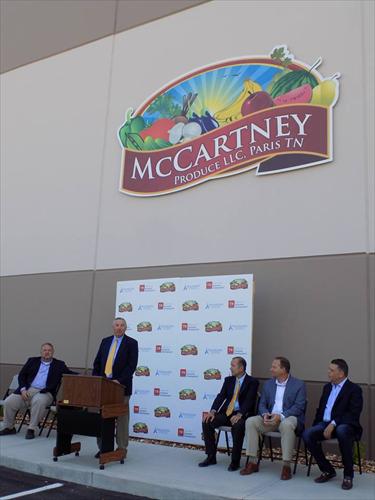 From WENK/WTPR Radio- Paris, Tenn.-A large crowd of state and local dignitaries were on hand Thursday morning to help usher in a new era for the McCartney Produce Co. at its new location.

Paris Mayor Carlton Gerrell echoed Greer’s sentiments, noting, “This is a partnership and it further exemplifies what we do here.”

“Many people seem to think of McCartney Produce as a small company with a small distribution area, but we’re not,” Randolph said. “Our area includes all the way to Asheville, N.C., New Orleans, Atlanta, Evansville, Cape Girardeau, Hot Springs, Arkansas, Mississippi—we’re all over. We distribute products to stores, restaurants, retail, restaurant chains.”